Twitter can help you reach a wider audience by letting your followers know that you have created new content on your blog.

When your followers re-tweet your message, their followers may decide to check out your site and possibly start to follow you.

This series of posts came from assistance I was giving to a friend who is undertaking the Camino de Santiago and is going to document his journey with a blog. While Mick decided not to use Twitter, this post summarises what we learned all the same.

Mick has started his journey; you can follow his progress at https://mickscamino.wordpress.com.

Twitter messages contain no more than 280 characters (recently increased from 140 so update your app if you don’t have the large allowance). They can contain photos and often link to web pages with additional content. A twitter message is called a tweet - and the verb associated with sending one is to tweet. People who send them are sometimes called tweeters.

To use Twitter successfully you need to build a following. Your messages can technically be viewed by anyone, but people who have decided to “follow” you can see your new messages appear whenever they log in on-line or using the Twitter application on their hand held device.

You can reply to tweets sent by other people. The reply will only be seen by people who follow both you and the original tweeter. It is effectively a brand new tweet with a reference to the original.

You can re-tweet. This let’s everyone following you see a tweet you like. Getting a famous person, or at least someone with many followers on Twitter, to re-tweet something you wrote is an often attempted as a means to increase the number of followers or to publicise a current issue.

Another way of gaining an audience is to be @mentioned by another tweeter. This will allow their followers to click through to your feed.

Similar to Facebook, you can “like” tweets that you read. These make them easy to find later and also let people following you know that you found something of interest.

Twitter can be used to send direct messages to another user, but this is not the main purpose of the application. Direct messages can be larger than normal tweets in size.

You will often see a word or phrase prefixed with the hash character, #, on products or their advertisements, by news media, politicians, campaigners, television shows and many other products, clubs or services - anything really.

The hashtag allows people to search Twitter for messages relating to a single topic. They may not follow any of the people tweeting about it, nor want to, but are interested in finding information about the topic.

For example, searching for #StarTrek will get you tweets posted by anyone interested in the Star Trek television and movie series.

Topical to Mick’s Camino is a hashtag used by others who undertake the journey: #CaminodeSantiago. This contains photos and news from the many people undertaking the pilgrimage.

Who will see your tweet really depends on how many people are following you or how topical the post is. With careful and correct use of hashtags, your message can reach a wider audience and has a greater chance of getting noticed.

One of the great things about Twitter is the freedom you get as both a poster and a follower. It doesn’t really matter that every single utterance is consumed. Twitter gives a connectedness that would otherwise not be possible, while allowing a certain amount of distance.

If you need someone urgently you would probably ring them on the telephone. If it doesn’t need an urgent response - later today will do - a text message might suffice. When it’s a little less urgent than that or too long winded you could send an email.

Twitter goes beyond that - it really doesn’t matter if followers see or understand everything that you write. They have no obligation to respond or engage. They decide when they want to connect.

It also frees up the sender from having to manage a large number of contacts. For a blogger, simply tweeting that a new post on your blog has been published will allow those interested to see. The blogger doesn’t need to collect email addresses and manage people that want to be removed from the mailing list, they can simply stop following you or block out your tweets.

Tweeting is also useful to periodically remind poeple of older posts. Perhaps a collection of articles is now complete. A reminder sent via a twitter message is an unobtrusive way of letting your readers know. 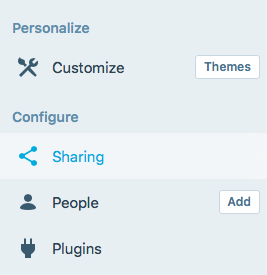 Most of the different social media channels are covered here. You can use the Connect button next to one to allow WordPress to post on your Twitter feed. 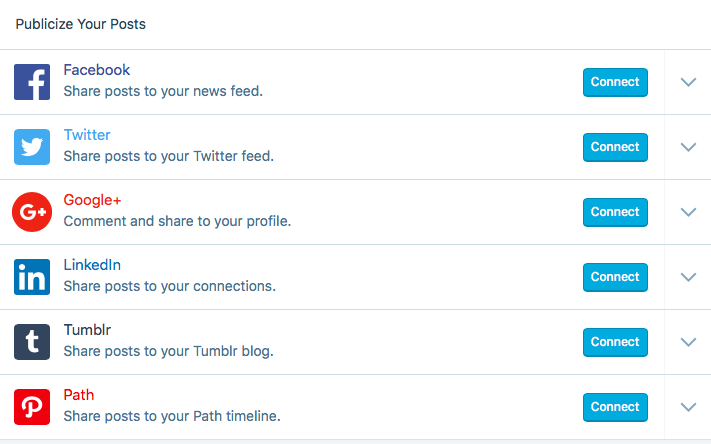 You need to enter your Twitter credentials on the pop up screen. Note that the screen shows clearly what you are giving access to. Be careful if multiple people have access to WordPress, perhaps as administrators but you would not like them to be able to update your Twitter profile. 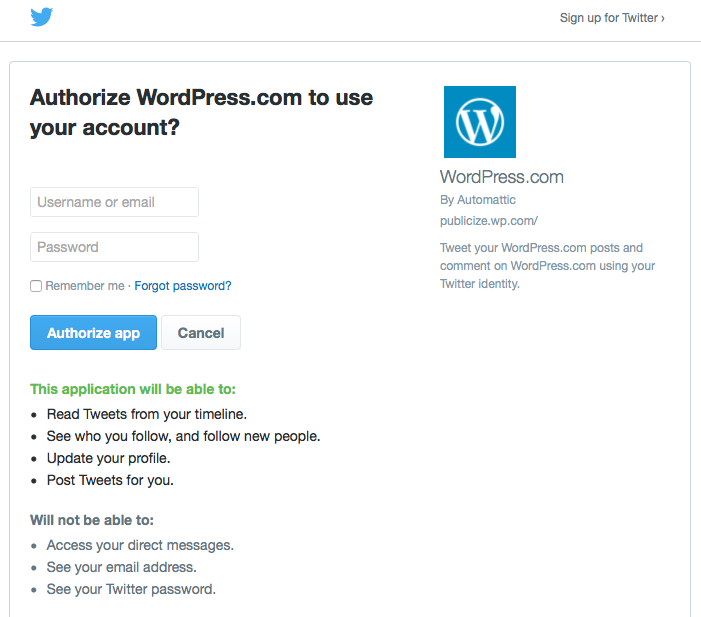 Once you have been authorised the connection will be displayed with a convenient Disconnect button if you no longer wish to post.

WordPress will automatically send a Tweet when you publish your new post. This will include the title, a shortened link to the article and the image if one is associated with the post.

It is possible to customise the tweet from the Edit Post page. There is a Sharing section to the Settings panel. 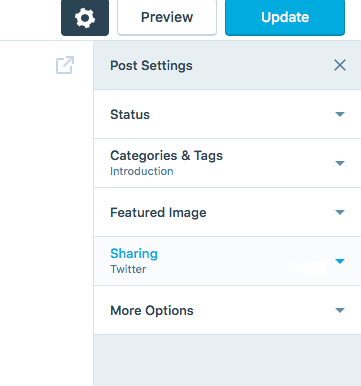 The message can be easily customised here. Note that the message is a little shorter than normal to allow space for the shortened link. 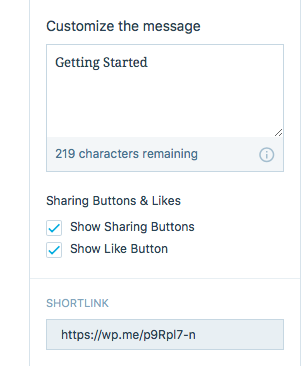 By default the sharing and like buttons appear on your posting (assuming the theme you are using displays them) so that other people can post about your page on one of their social media channels. This can be turned off per post on this option panel.

That about wraps up Twitter for me. I don’t engage much with it personally at the moment. I may revisit this when trying to get publicity for this site at some point in the future.

Ghost, the software on which this blog is based does not integrate as closely with Twitter; there is no option to automatically send a tweet when a blog is published.

There are sharing options for the most popular social media applications, Twitter and Facebook, on each post page that are accessible in a menu bar (depending on the theme in use).

The contents of the card can be customised within the post in a similar way to WordPress. So it would take a extra click or two to send out a tweet following publication.

In the future, when I decide to engage with social media, I will look at some third party applications that stand alone and manage connectivity over a number of channels: email, Twitter, Facebook etc. 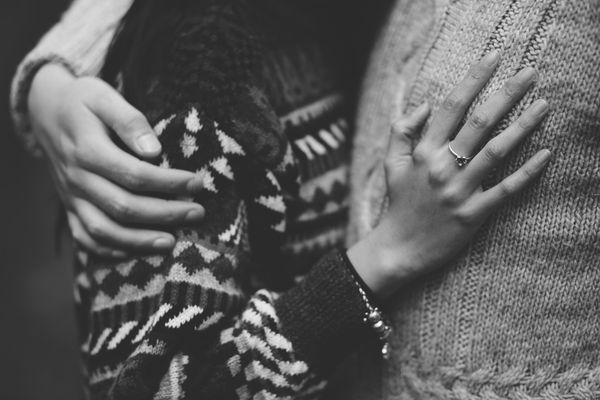 The Agile development process encourages us to respond to changes in requirements as a regular part of the process. How we react to unexpected change can define a team’s Agile maturity. Embrace change. This is what gives you and your organisation a competitive edge. 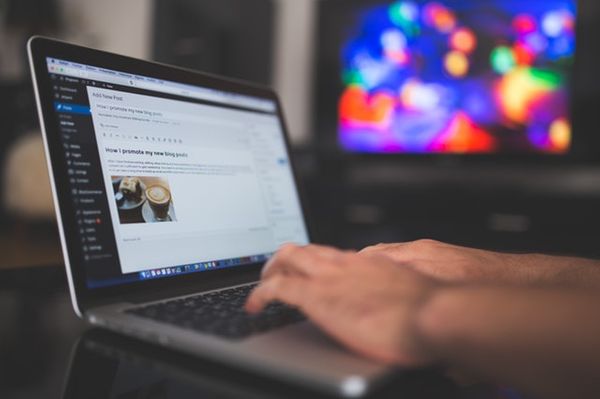 Most blogging platforms including WordPress and Ghost use the concept of a post versus a page to distinguish two types of content. It’s important to understand the difference before going too much further.